In the midst of the emergency due to the Covid-19 pandemic, the "Committee for a gesture of solidarity in OCME" responded to the appeal of the Civil Protection and the State Police, engaged since the very first hours in the management of an unprecedented national emergency.

The great race of solidarity "Covid-19 Emergency" promoted by OCME last spring has reached its completion.

"Committee for a gesture of solidarity in OCME", a delegation the company belonging to Aetna Group, which, together with Robopac, represents the leadership in the end-of-line packaging segment, on October 8th delivered the last part of material collected during these months to the Parma Civil Protection.

The event follows by a few days the other huge delivery to the union "Polizia di Stato di Parma".

A total of 16 thousand surgical masks, 4000 gloves and other personal protection material such as hand and surface disinfectants were donated.

In the midst of the emergency due to the Covid-19 pandemic, the "Committee for a gesture of solidarity in OCME" responded to the appeal of the Civil Protection and the State Police, engaged since the very first hours in the management of an unprecedented national emergency. 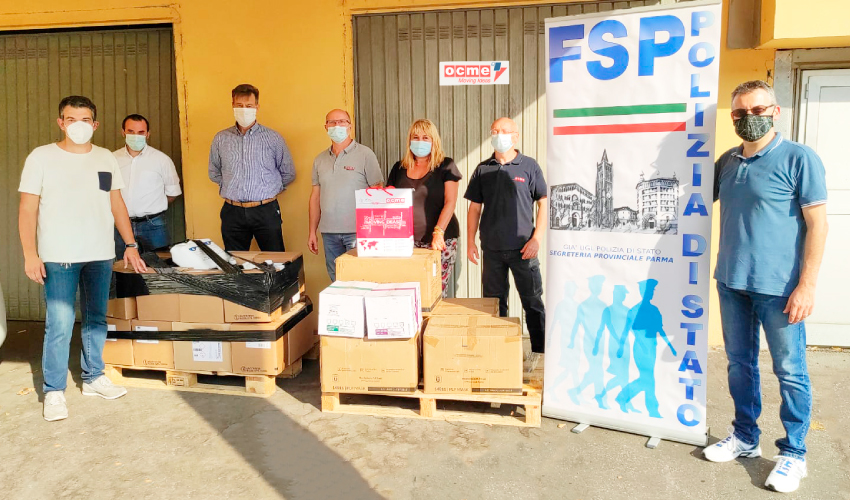 The first step of the campaign was the donation by employees of working hours with a reduction on their payroll for the months of April and May. This was followed by other charitable gestures to which the Aureli family, at the head of the Aetna Group and therefore OCME, responded generously, leading to a doubling of the amount collected.

"In this particular moment - the provincial secretary general of FSP of the State Police, Diego Assandri wrote in a letter of thanks to OCME - having such a large amount of masks, latex gloves, hand and surface cleaners, will help to spread a feeling of safety even in all those users who find themselves having to access, for various reasons, the structures of the State Police. We will work immediatly - concludes Assandri - to ensure that the material is distributed to all staff and reaches every State Police office in the province".

The donation to the Parma Police and Civil Protection is just the latest in a series of charitable initiatives that Robopac and OCME promoted during 2020: from the two pallet wrapping robots for the Red Cross in Rome and Avezzano (AQ), to the facial recognition device and turnstile for the Casa della Salute in Castel San Pietro Terme (BO), to the packaging of masks for the provinces of Rimini, Bologna and Parma, as well as initiatives outside the national borders.

These actions bear witness to the closeness of the Group to the territory and the awareness of its social role in every circumstances, offering a solid and concrete support even in the most difficult circumstances.